The Gargantos Boss event returns! Gather your alliance to take down this interdimensional horror!

Burn the board and compete in this Jean Grey (Phoenix) PVP Arena!

Thank you for playing!

MARVEL Puzzle Quest is the original Match 3 Super Hero Game! Compete with a community of over 20 million players worldwide and play as over 250 of your favorite Marvel Super Heroes in this battle role-playing game (RPG) featuring a unique match-3 puzzle twist!

Gather your favorite Marvel characters and clash in exclusive MARVEL Puzzle Quest campaigns, complete daily quests, and engage with epic event stories! Draft your own dream team from the largest mobile Marvel character roster to date! Take your pick from the most valiant Super Heroes to the most villainous baddies! You can mix and combine your teams however you want. Spider-Man, Captain Marvel, and Squirrel Girl? Of course!. Black Panther, Gamora, and Deadpool? Let’s go!

FEATURES
★ Collect and upgrade your favorite Marvel Super Heroes and Villains!
★ Battle in epic match-3 puzzle RPG gameplay!
★ Log in daily for rewards with S.H.I.E.L.D. Resupply and for new and exciting challenges!
★ Level up your match-3 skills with Puzzle Ops and take on challenging skill-based puzzles! Each puzzle comes with different clear requirements so every board is unique!
★ Form Alliances and assemble teams to fight opponents in PvP Tournaments and battle epic raid bosses! 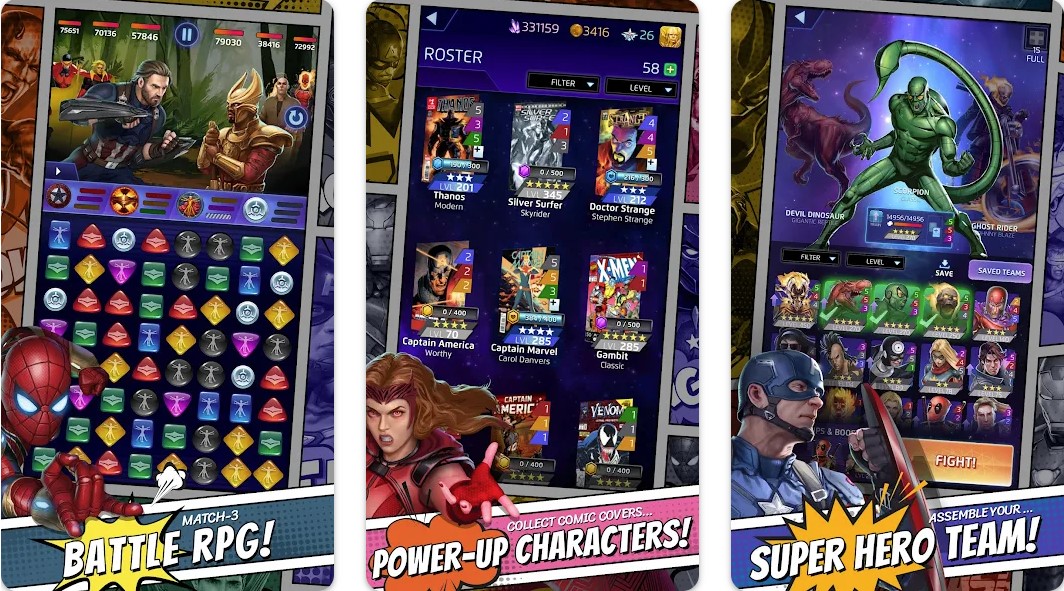 THE ORIGINAL MARVEL MATCH 3 GAME!
This is a battle! Match-3 or more tiles and harness the power of Iso-8 to build up your team’s abilities and manipulate the game board to challenge the most powerful characters from across the Marvel universe. Trap your opponents and bring forth crushing evidence with JESSICA JONES! Use BURST HEALING with KAMALA KHAN to keep up team morale! COUNTDOWN to destruction with powerful timed gems from CAPTAIN MARVEL! Go AIRBORNE and rain destruction on your enemies via VULTURE! Pelt your enemies with a hailstorm of ATTACK TILES powered by STORM!

RECRUIT MARVEL’S BEST HEROES AND VILLAINS
Recruit teams of three from over 250 of your favorite Super Heroes and Super Villains from the X-Men, Avengers, Guardians of the Galaxy, Eternals, Inhumans, and even some MARVEL Puzzle Quest originals! Each character features their own in-game Marvel comic book cover! Crack the multiverse and play with alternate versions of your favorite heroes! Slash your foes with Samurai Wolverine or take up the shield with Peggy Carter as Captain America. The multiverse of possibilities is massive!
New characters are being added to MARVEL Puzzle Quest consistently. Recruit Moon Knight, Miles Morales, Black Widow, Loki, Thanos, Scarlet Witch, America Chavez, Captain America, and more! You can even collect Limited Edition characters like Spider-Ham, Devil Dinosaur, and Howard the Duck to add to the fun!